Since my last post about servicing and maintaining my pottery wheel…

I have been taking full advantage of it – making lots, replenishing stocks!

I filled the shelves, only to empty them into the kiln for the first bisque firing of 2014! And it went perfectly!

The first glaze firing, however, wasn’t perfect. The kiln alarm went off at 4.14am, displaying only 1184 degrees Celsius (I fire up to Cone 9/10, around 1280). It was so painful, waiting for the kiln to cool down to see what had actually happened in there.  Did it hit top temperature or has it underfired? Going over my firing schedule, by 4am, the kiln should of hit top temp just before 3am and should have cooling down so the 1184 didn’t seem like the end of the world.

But alas, when I opened the door, the bottom shelves were definitely chalky while the top shelves, while softening, were clearly underfired. There was nothing to do but close up the door and restart the kiln.

This second attempt proved to have no issues and I was quite happy with the results!

Until I got to the second shelf from the bottom, towards the back of the kiln… An entire shelf (about 12) of beakers were covered in dots! An attack of the ceramic blister.  It’s like teenage acne or sunburn after a day at the beach, except, you can’t pop these blisters. 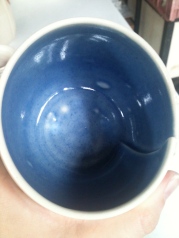 See all those white dots… blistering! 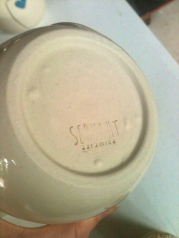 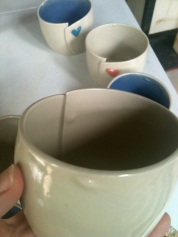 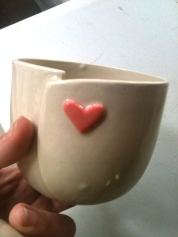 Contained to that one shelf, I think I found the kiln’s hot spot. That’s my working theory anyway. The beakers were a mix of designs and were thrown on different days and didn’t show any air bubbles after the bisque firing. Think of the clay overheating and bubbling up – that’s a simplified way to understand blistering (feel free to jump in with other definitions my pottering friends).

So that was a downer. But there were plenty of gorgeous things that came out of that kiln so I’ve gotta keep on thinking of the positives!

Quite a few of these very pretty things will be available at Handmade Redcliffe next Saturday (March 1st).

As well as next Sunday’s Suitcase Rummage at Reddacliffe Place

I’m looking forward to these markets and would love to meet you there!
I’ll have a few market specials to kick off my marketing year so don’t miss out on those!!

Hope you had a great weekend!

With a big smile for you, Rachel.