I celebrated the upcoming arrival of baby boy Cheesman this weekend with the family. It was wonderful – an absolute joy to share the joy and excitement of Rachel Ann and Daniel.

Much of the party was planned while on cruising along the Murray River on the Cramer family houseboat trip a few weeks back (click).

We had a couple games – a pass the parcel, guess what traits the new parents would ideally like for baby to have (ie: who’s skin, hair, teeth) and Super Mum (hanging washing items on a line while holding the baby – an oversized stuffed animal). We also decorated some wooden blocks G-Pa cut and sanded. Nana Rose has now taken the blocks and will seal them for future play times. 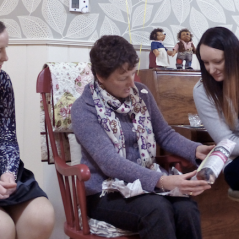 Cramers with a Juers woman in the middle

Beckers and a work friend of Rachel Ann

Rachel Esther did a phenomenal job of theming the party – she made those amazing hot balloons which hung from the ceiling as well as the cloud bunting, invitations, food and name tags and this beautiful wall piece for baby’s room.

Now, you might be getting a bit confused by my use of ‘Rachel’ in this post and especially when I explain the Rachel sisters photo…..

Okay, so I’m the one on the left (also known as Rae), Rachel Esther also married into the Cramer family, Rachel Ann is the original Rachel Cramer (who’s pregnancy we were celebrating) and she married Rachel Maree’s brother Daniel. Crystal clear? Many people don’t think so – here’s a diagram Rach Esther whipped up for her instagram peeps who were tad confused by the above photo…

Thank goodness we all have different middle names!

Now, not only was I was super excited to make it down to Melbourne (big thank you to Steve and Rosemary for making it happen), I was thrilled to contribute a little bit of clay to the occasion as well.

Balloons made! I love how the colours change during the firings – the purple will transform to the bright blue, the blue will be green, the brown will be the less intense blue but the yellow is yellow 😛

Detail of the textured baskets

The magnets were super heavy duty and ridiculously attracted to each other! When we were gluing them, they wanted to pull together and we ended up having to space them all over the living room!

A selection of the finished balloons

The balloons will be very useful for the upcoming baby arrival  photos – just over 5 weeks to go until we meet baby Cheesman. He’s already my favourite nephew haha. My favourite niece and I had some fun times over the weekend too.

Despite how good the weekend was, coming home to Andrew was pretty awesome too. From the airport, we went to see ‘The World’s End’ which was pretty stupid (these guys did Shaun of the Dead and Hot Fuzz after all) but there were a couple of really funny moments in it.

Now there’s lots of work to get into for Servant Ceramics and I’ve got at least one special announcement to make later in the week! The news isn’t that Servant Ceramics has joined instagram (find ‘servantceramics’ there) but that’s still pretty exciting right?

Have a joy filled start of the week!!